A Resolution of Censure to Republican Representative Tom Patton Who Voted
in Favor of Newly Elected House Speaker Jason Stephens
Adopted by Strongsville GOP Membership on January 30, 2023
WHEREAS, Ohio Republicans achieved a majority of members in the 135th House of Representatives, with sixty-seven (67) members; while the Democratic Party achieved a minority of members, with thirty-two (32) members;

WHEREAS, between December 22, 2023 and January 3, 2023, Representative Tom Patton (R-Strongsville) dishonestly and shamefully concealed his intention to vote for Representative Jason Stephens (R-Kitt Hill) for Speaker of the House from The Strongsville GOP Leaders and Members;

WHEREAS, on January 3, 2023, the 135th House of Representatives elected Representative Jason Stephens with a unanimous vote of all thirty two (32) Democratic Party members and a minority of twenty two (22) Republican members, including Representative Tom Patton, whom was part of the Republican Caucus that elected Derek Merrin as the Caucus’ nominee;

WHEREAS, Representative Stephens swore in with Democratic Party Minority Leader Allison Russo (D-Upper Arlington) holding a Bible for him to swear upon;

It is with great disappointment that I feel compelled to share this information about our State Representative, Tom Patton's decision to break ranks with the Ohio House Republican Super Majority and join ranks with the Democrats to choose their preferred candidate for Speaker of The Ohio House.

On January 3rd of this year, Representative Patton, along with 21 other Republican State House Members, turned their backs to the Super Majority Republican caucus and joined all 32 Democrats to choose a moderate Republican as their Speaker of The House instead of electing the candidate chosen by the Republican Caucus. Not only did he do this deal with the Democrats, he did so while purposefully misleading the Strongsville GOP Leadership in writing and by phone for the 2 weeks leading up to his defection, claiming consistently that he had no intention to defect -- only to do just that.

The Strongsville GOP Board met last Wednesday and voted unanimously to submit our concerns in writing to Representative Patton and ask that he present his case for this defection to you, the members. We pledged to print his response in this email and afford him an audience at a Special Meeting of the Strongsville GOP on January 30th at 7pm at The Best Western Event Center.

I'm further saddened to report that yesterday, Representative Patton responded indirectly through staff that he would not be offering you any justification for this action. Furthermore, his plans to attend the January 30th meeting and address his actions to you directly are unclear. (See his staff's response after this letter) We sincerely hope that Representative Patton reconsiders and chooses to respect those Republicans that have supported him throughout his 20-year career as a REPUBLICAN elected official.

As Ohio's Largest Grassroots GOP organization, Strongsville GOP will always stand up and defend our conservative principles, defend the Republican Party and hold our elected officials accountable. On Behalf of the Members of The Strongsville GOP Board, I submit this letter and further details to you for your review and comment.

We Want To Hear From You

After reviewing this statement and doing your own research, we want to hear from you. Please respond using the form below and share your opinion on this topic before Friday, January 27th. All respondents will be kept private.

There will be an official meeting of the Strongsville GOP Membership
January 30th at 7pm
Best Western Event Center
15471 Royalton Rd, Strongsville, OH 44136
​


Re: Speaker of the House Vote

This letter is being submitted to you on behalf of the Officers, Directors and Board Members of The Strongsville GOP relevant to the recent vote of the Ohio House of Representatives to select Jason Stephens as Speaker of the House over the Speaker candidate chosen by the Republican Caucus, Derek Merrin.

Following the recent statewide elections where Republicans increased their majority from a simple majority to a super majority in the Ohio House, Derek Merrin was elected by the Republican caucus to be the next Speaker of the House without dispute by you or others in the caucus. In fact it has been reported that you along with all other members of the caucus agreed to vote unanimously for Derrick Merrin for Speaker on January 3rd.

From December 22, 2022 through January 2, 2023 (the day prior to the vote for Speaker), you confirmed both in writing and by phone to Strongsville GOP Leadership and its members that you planned to support the efforts of Derek Merrin in his quest to become the Speaker of the House. Even stating that you “appreciate his honesty for telling me” of his plans to push several free-market bills that would adjust union rules in Ohio. During this time, Strongsville GOP Leadership fought to correct what you led us to believe were false accusations in the media and with Republican leaders around the state. At no point did you announce your actual intention to vote with all 32 Democrat members and 21 fellow Republican members to choose an alternate Speaker.

Clearly, your decision to vote for Jason Stephens, a moderate Republican at best, over Derek Merrin who is a conservative and who would have been pushing conservative legislation during his term in office was something you purposefully concealed from us.

In submitting this letter to you, we are aware that your House District had been amended in 2022 in which a significant portion of Democratic based territory was added to your District. We are further aware that you are term limited and will likely run for election in the 24th State Senate District in 2024. With the Supreme Court under solid Republican control once again, we expect the new 24th Senate District to once again be a solid Republican district.

We are further aware of the following:

As such, we see no viable reason for you or any of the other 21 Republicans to turn your back on the 67-member super Republican majority and collaborate with the Democrats as to the election of the moderate, Jason Stephens, as Speaker of the House. In essence, the majority of the Representatives who voted for Jason Stephens are Democrats. As such, you and the other 21 Republicans voted for the candidate as supported and presented by the Ohio Democratic House Representatives. Your candidate for Speaker was eventually sworn in while the darling of Planned Parenthood, Minority Leader Allison Russo, held the Bible.

When it was learned that you had voted for the moderate Jason Stephens, you advised Strongsville GOP Leadership in writing that “Merrin bad for me” (sic) and that you had objections as to Derek Merrin because he was in favor of conservative issues such as Right To Work and Prevailing Wage adjustments which were not favored by the Democrat/Liberal representatives.

[EDITORIAL NOTE ADDED TODAY: Derek Merrin was endorsed by his local trade unions and by ACT OHIO. These facts clearly calls this statement about his policy intentions into question]

In voting for Stephens, it appears that you voted for your own self interests and not for the interests of your constituency and all other Republicans, particularly conservative Republicans, not only in Northeast Ohio but in the State of Ohio.

Strongsville GOP Leadership feels strongly that you violated your duties of allegiance to fellow Republicans, and particularly conservative Republicans, who have provided support for you over your entire political career. In collaborating with the Democrats for the selection of the Speaker, you have made Northeast Ohio, and possibly the State of Ohio, a laughing stock among other state governments.

Allison Russo, House Minority Leader recently was quoted as saying “it is beneficial to us at times that they are divided”. This is the last thing that Ohioans, particularly Republican voters from Northeast Ohio, need to deal with. The actions of you and the other 21 Republicans clearly indicates a rift within the party and a clear lack of commitment to conservatism in the State of Ohio. There are absolutely no valid reasons for the 22 of you to break ranks with the remainder of the House Republicans to “make a deal” that is not in the best interest of the Republican Party who represent the clear majority of voters in the State of Ohio.

While our belief that your action is a strike to the heart and soul of the party, we believe that you deserve every opportunity to explain your vote and make your case to the membership. We request that you respond to this letter by Tuesday, January 17th and we pledge to publish this letter and your response together in its entirety to the Strongsville GOP email list, website and social media. We also would like to afford you the opportunity to address the membership directly at a special membership meeting on Monday, January 30th at 7pm at The Best Western Event Center. Thereafter, the members of Strongsville GOP shall determine what, if any response shall be deemed necessary.

Thank you for your time and attention. 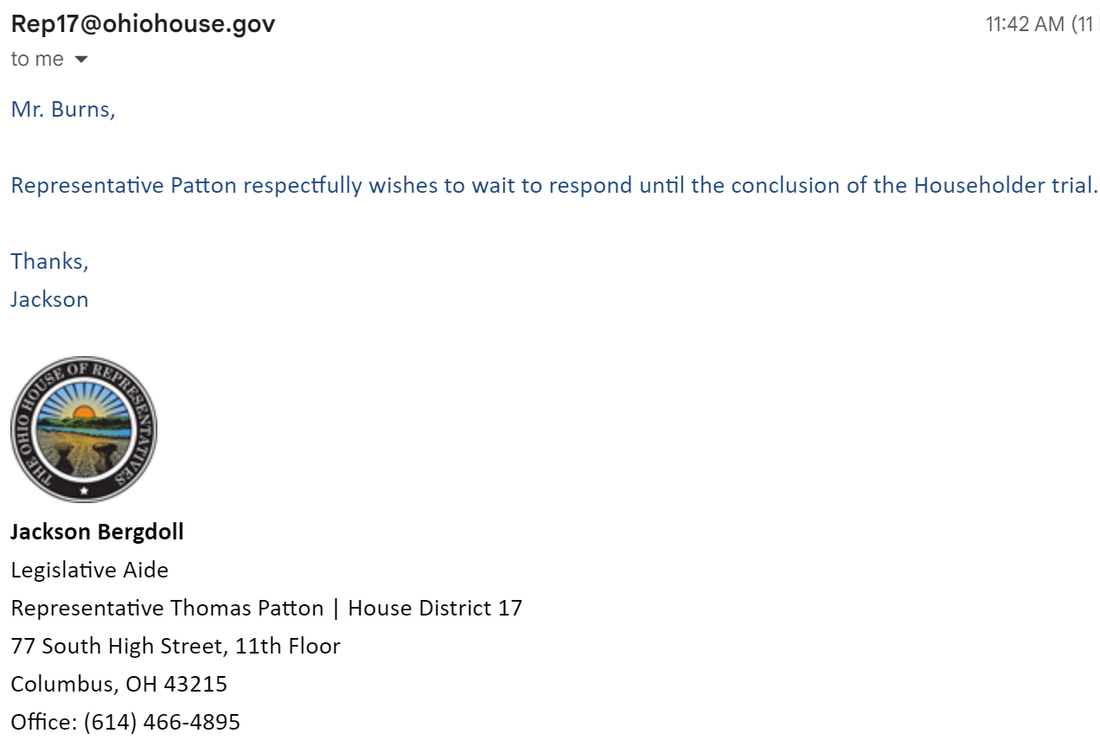 WHEREAS, on January 3, 2023, the 135th House of Representatives elected Representative Jason Stephens (R-Kitt Hill) with a unanimous vote of all thirty two (32) Democratic Party members and a minority of twenty two (22) Republican members, each of whom were part of the Republican Caucus that elected Derek Merrin as the Caucus’ nominee;

WHEREAS, Representative Stephens swore in with Democratic Party Minority Leader Allison Russo (D-Upper Arlington) holding a Bible for him to swear upon; 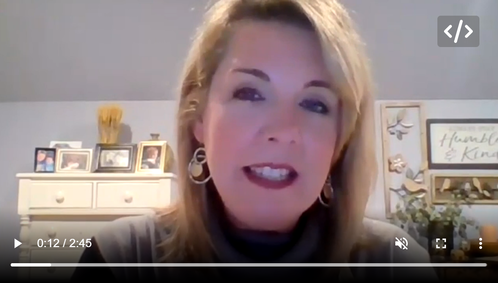 Cabal that elected Jason Stephens Ohio House speaker includes all Democrat representatives, Columbus lobbyists and a small minority of reneging House Republicans, collusion insiders say is all about power and money over principle and party

January 3rd, 2023, will go down in history, as a very sad day for the people of the State of Ohio. It was on this day that the “Gang of Twenty-Two” Republican Ohio House members violated the trust of the people of Ohio.

Democrat Leader Russo's Interview
“It is beneficial to us at times that they are divided,” the leader said